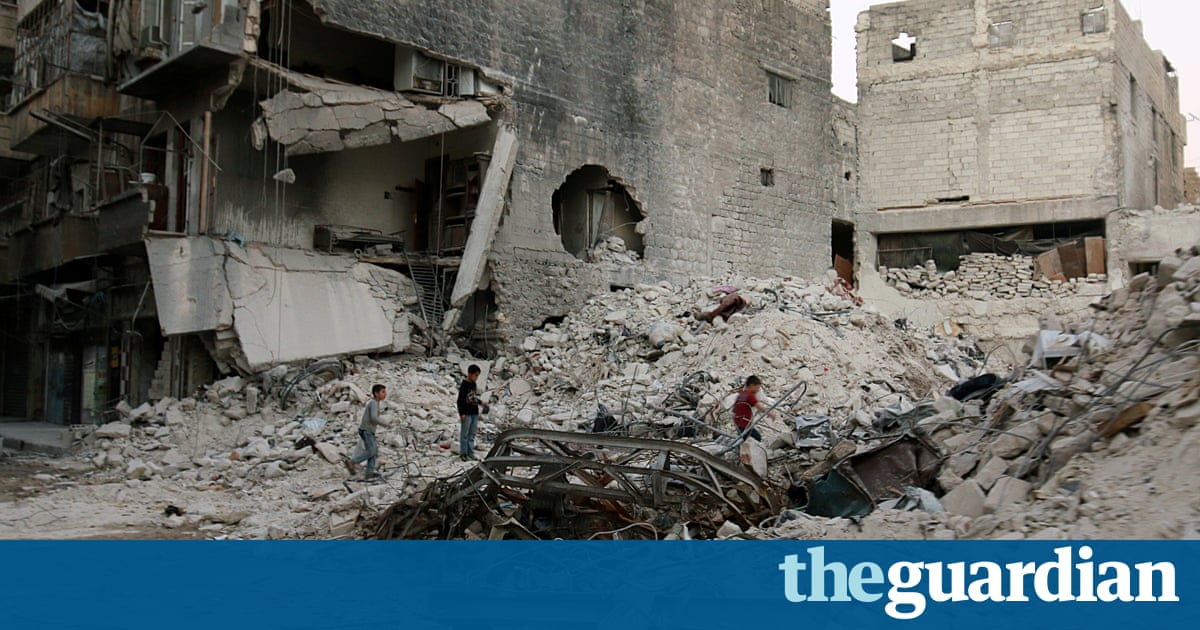 The UNs chief humanitarian official said the people of Aleppo are facing a humanitarian catastrophe worse than anything witnessed so far in Syrias brutal five-year war.

Stephen OBrien made the remarks to the UN security council on Thursday as Russia rejected calls to halt its bombing campaign on eastern Aleppo, saying it might consider a 48-hour humanitarian pause instead.

Let me be clear: east Aleppo this minute is not at the edge of the precipice, OBrien said. It is well into its terrible descent into the pitiless and merciless abyss of a humanitarian catastrophe unlike any we have witnessed in Syria.

Syria is bleeding. Its citizens are dying. We all hear their cry for help.

Meanwhile, US officials said they were still considering options for a plan B policy in Syria, after the failure of the administrations plan A the attempt to pursue a ceasefire with Moscow.

One of the options on the table is understood to be sanctions against Russian and Syrian institutions and individuals possibly including pilots and unit commanders who were involved in the targeting of a UN humanitarian convoy, and the use of bunker-busting and incendiary bombs on Aleppos densely populated eastern districts, home to 275,000 besieged people. More than 100,000 are children.

A state department spokesman said he could not comment on any potentially punitive measures under consideration by the administration.

The UN secretary general Ban Ki-moon said on Wednesday that by using such hugely destructive weapons, Russia and the Syrian regime were knowingly committing war crimes.

The US ambassador to the UN Samantha Power described the escalation in Syria as the most savage week weve seen in an incredibly savage five-plus-year war, with more than 1,000 people killed by 1,700 airstrikes on east Aleppo alone.

Power described the latest offensive as soul-shattering and accused Russia and Syrian president Bashar al-Assad of unleashing a savagery against civilians.

Were at a turning point, she said.

The Obama administration has been warning of such a turning pointing since the collapse of the US-Russian ceasefire on Monday last week and the resumption of heavy bombing of Aleppo, and has been threatening that its patience with Russia and the Assad regime was not limitless.

On Thursday, secretary of state John Kerry warned that that Washington was on the brink of ending its talks with Russia over the Syrian conflict.

I think we are on the verge of suspending the discussion because, you know, its irrational in the context of the kind of bombing taking place, to be sitting there, trying to take things seriously, Kerry said.

But Kerrys deputy Antony Blinken came under tough questioning by the Senate foreign relations committee on what the administrations plan B was.

Blinken said Obama had called for a review of all other options and that review was still underway.

There is no plan B. There never has been a plan B, the committee chairman, Senator Bob Corker, retorted.

Blinken said most of the consequences for Russias actions in Syria would be self-inflicted.

Its now in a position of having gotten in, its very, very hard to get out because Assad cannot win. They can prevent him from losing, but he cannot win, he said. The leverage is the consequences for Russia of being stuck in a quagmire that is going to have a number of profoundly negative effects.

Blinken said Russia would be seen in the Middle East and beyond as complicit in the slaughter of Sunni Muslims.

The US threatened on Wednesday to end contacts with Russian officials that had been established between two teams in Geneva with the aim of establishing a ceasefire. Sergey Ryabkov, the Russian deputy foreign minister rejected the threat as an emotional breakdown.

Ryabkov said that US calls for a return to the original proposal of a seven-day truce were unacceptable, but that Moscow would consider a two-day pause.

In order to ensure humanitarian access, we have repeatedly offered a 48-hour pause, but American counterparts, for reasons known only to them but not to us, are totally fixated on the requirements of the seven-day pause, Ryabkov said Thursday, according to Interfax. A seven-day break is a sufficient period to ensure that terrorist groups can carry out activities to rearm, rest and regroup.