Slamming the manuscript: Why journalism is rejecting the head of state’s do-over 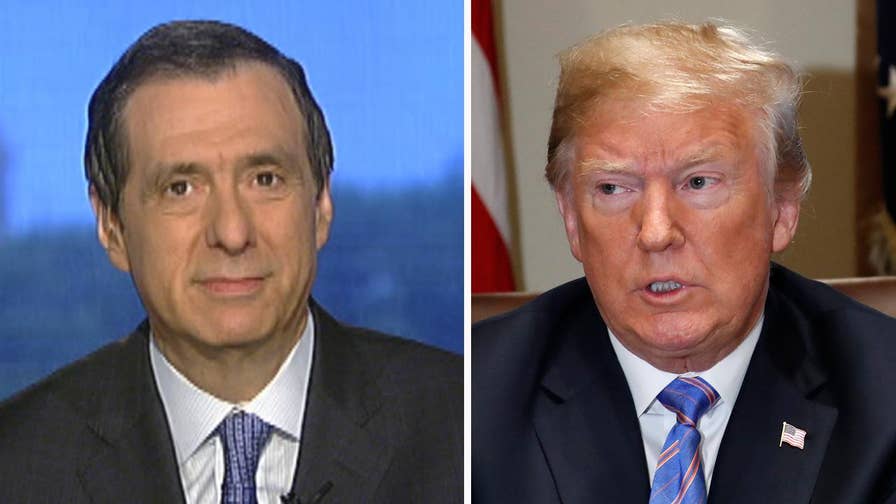 Kurtz: Why the Media remain hot on Helsinki

‘MediaBuzz' host Howard Kurtz weighs in on the mainstream media maintaining the flames hot on Trump's comments to Putin even after he strolled them back.

The media seem ascertained not to give the president a do-over.

His attempt to clarify what he said in Helsinki is being widely rejected, even taunted, by many in mainstream media land.

At a minimum, President Trump deserves credit for saying what he should have said to Vladimir Putin, that he accepts the findings of U.S. intelligence agencies that Russia interfered with the 2016 election. He may have been pressured into saying it–not just by the media furor but by Mike Pence, John Kelly, Mike Pompeo and John Bolton, according to reports–but he said it nonetheless.

What depicted particular skepticism was Trump's explanation that he misspoke one word, that he meant to say “wouldn't” and not “would, ” as in “I don't consider any reason why it would” be Russia.

The president's demeanor, as he read from a script, was less than enthusiastic. And he ad-libbed that in addition to Russian hackers, it could have been “other people.”

I've considered many on-air references to “hostage video, ” as if Trump was reciting these words under duress. And some anchors rent him, in the new style of strong criticism of Trump from those who are not commentators.

CNN's Erin Burnett said Trump was making a “dog ate my homework” alibi, adding: “How stupid does Trump think we Americans are? The president's excuse for his embarrassing press conference, where he sided with Vladimir Putin over his own intelligence chiefs, does not add up.”

Slate called Trump's Tuesday walkback “only a little less disgraceful” than Helsinki, under the headline: “Nothing Trump Says Can Be Trusted.”

In a most sophisticated vein, The Washington Post offered these observations 😛 TAGEND

“The way he delivered his statement of retreat was classic Trump, a dual message — a ritual statement of confidence in U.S. intelligence officials for those who insist that the president respect the nation's systems and mores, but also winkings and nods to those who like Trump expressly because he's eager to smash china and topple tradition …

“The signals had been sent, a quick wave of a white flag for those who insist on such things, and a zesty little aside, a winking and a nod, to those who needed assurance that their renegade chairwoman would never cave to the inundate dwellers, never back away from his commitment to blow up the old, failed ways of Washington.”

There was another clarification yesterday after the press ran with a terse Trumpian response–“no”–to ABC reporter Cecilia Vega's question about whether he believes Russia is still meddling in American politics.

But Sarah Huckabee Sanders, pressed at the briefing, said Trump was simply saying “no” to the idea of taking questions , not addressing Moscow's current abilities. Vega subsequently said she believes Trump was in fact answering her question.

So is all this the indelible stain that the sustained media outrage would suggest? The New York Times deserves credit for posing the question 😛 TAGEND

“The question was whether he had reached a genuine turning point or simply endured another one of those episodes that seems decisive but ultimately fades into the next one.”

What constructs this feel different is that some commentators are actually accusing Trump of being a traitor–including, by the way, Times columnist Charles Blow, who delivered the verdict before Trump met with Putin.

“While the accusation of treason has been thrown around on the edges of the political debate from time to time, never in the modern epoch has it become part of “the member states national” conversation in such a prominent style …

“Whether this leads anywhere remains unclear. Past moments that seemed decisive, like the ‘Access Hollywood' tape and Charlottesville, came and ran. For now at least, lunging the treason charge seems more about making a point than making a example in a courtroom or impeachment hearing. But it is an explosive word to use and that by itself suggests how fraught this moment in the nation's history has become.”

It is also a charge that reveals how much some journalists abhor Donald Trump. There’s a huge gulf between ripping the president for yielding to Putin over his own intel chiefs and denouncing him as some kind of Benedict Arnold.

What I said on the air yesterday is that when the president makes a mistake or inflammatory commentary, it may be a 10 — but then the media often go to 11, or 13. That will make his supporters more likely to position this entire episode, walkback and all, as more media pummeling of Trump, rather than a grave self-inflicted wound on the international stage.

Howard Kurtz is a Fox News analyst and the host of “MediaBuzz“( Sundays 11 a.m .). He is the author “Media Madness: Donald Trump, The Press and the War Over the Truth.” Follow him at @HowardKurtz. Click here for more information on Howard Kurtz .