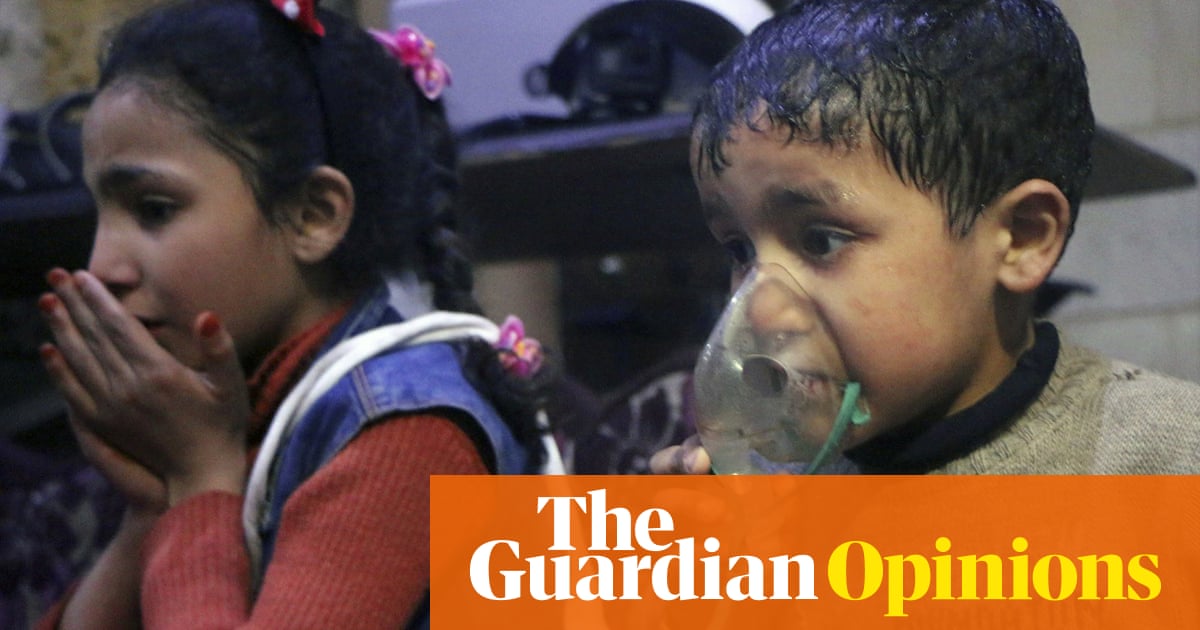 Conscience has become the mayfly of our epoch: here today, gone tomorrow. For the moment, the world is transfixed by the horrific images from Douma, near the Syrian capital, Damascus. Dozens have died, and hundreds lie injured after what was quite clearly a chemical weapon attack.

Dead children, their mouths flecked with foam, chide us through our screens. Condemnation, calls for action, a global spasm of what Martin Amis calls” species shame “: the pattern of response to the long Syrian catastrophe has become almost ritualised.

It was no different after the Assad regime's chemical attack in Ghouta in August 2013; or when the image of Alan Kurdi, the drowned three-year-old refugee, became a symbol of dishonor in 2015; or the following year, as a similar status was accorded to the picture of Omran Daqneesh, a young boy pulled from the rubble of Aleppo, contained within blood and dust; or last April, when President Trump, supposedly traumatised by footage of the horror worked by the sarin attack on Khan Sheikhun, fired 59 Tomahawk cruise missiles at al-Shayrat airfield in western Syria.

At the time, Rex Tillerson( since sacked as secretary of state) declared US policy to be that” the reign of the Assad family is coming to an end “. If Bashar al-Assad's patron, Vladimir Putin, didn't like it, that was just too bad. Yet, as so often, the flame and fury were transient.

Since his phone calls congratulating Putin on his re-election, Trump has been signalling his intention to withdraw from the conflict and set” America first “. Last Thursday he said categorically:” We'll be coming out of Syria– like- very soon .” Truly, the words of a statesman.

Of course, the hellish scenes in Douma have jammed the brakes on Trump's eagerness to disengage from the Syrian conflict, at least for now. He has tweeted with his customary dignity:” President Putin, Russia and Iran are responsible for backing Animal Assad. Big price to pay … Another humanitarian disaster for no reason whatsoever. SICK !”

But what kind of response will follow, and for how long? Like a flare, global revulsion will light up the geopolitical sky for a while and force-out heads of government around the world to chime in with their outrage. The matter will be discussed robustly at the United Nations. There may even be a security council resolution. With luck, donations to aid agencies will spike.

And then … nothing much will happen. The images from Douma will soon be wrenched from the digital shop window, supplanted by a sporting scandal or the latest commercial venture by the Kardashian clan. The statements of firm intent made by international organisations will melt into bureaucratic inertia. And the cycle will begin again.

It need not have been so. There was a moment, after the Ghouta massacre, when Assad could have been forced to the table by a sustained and coordinated military and diplomatic campaign. A lengthy ceasefire would have stabilised the region, contained its warring cliques and offered at least a glimmer of hope that a sustained peace might be brokered, probably involving a complex cantonisation of Ba'ath-controlled Syria.

Many thousands of UN-authorised peacekeepers would have been required, as well as a daunting commitment to the reconstruction of the shattered nation's infrastructure. The chore would have been formidable, lengthy, expensive: all the things that 21 st-century foreign policy is meant to avoid. But it was, at least, conceivable.

That strategy was stillborn for many reasons- one of which, shamefully, was Ed Miliband's refusal in August 2013 to back David Cameron's bellow in the Commons for an urgent response to the attack.

Why have we let this happen? First, the west has conspicuously failed to recover from the trauma of Iraq. To this day, the very term remains a shorthand for national disgrace, infecting the argument for military action of any kind. It has become a veto deployed gratuitously by those who resist the Atlantic alliance, domestic security measures against Islamic extremism, or just about anything else. Too often the consequence of Iraq has been not sensible caution but sanctimonious procrastination.

Second, we do not have a viable Russia doctrine. Having declined to usher the former Soviet bloc into the family of free nations with a modern Marshall Plan- presuming, instead, that regular elections and the free market would do the trick- we therefore, and remain, uncertain of how to handle what Russia has become.

We were caught napping by Putin's cult of national fate, ruthless authoritarianism and aggressive foreign policy. In the information war, he has made buffoons of the hemisphere that launched the digital revolution, by grasping so quickly how to weaponise its shiny toys.

I am, unfashionably, a liberal interventionist, a believer in the” responsibility to protect“( or “R2P”) doctrine in international law, codified by the UN world summit in 2005, which mandates the” collective use of force” in order to stop genocide and the murder of civilians. I strongly support generous international developing spending and believe passionately in the duty of wealthy nations to accept refugees.

But the world is turning away from such notions, isn't it? The nations of the west are house walls, seceding from the EU, diluting republic, embracing the isolationist populism of the right. I hope this is not a long-lasting settlement, but it is certainly in the ascendant.

So do not expect the horror triggered by Douma to be matched by the will to do anything too significant about it. Conscience will have its moment, as it always does. And then, tragically , normal service will be resumed.

* Matthew d'Ancona is a Guardian columnist

Obama Ramps Up Special Forces Mission In Syria Against ISIS